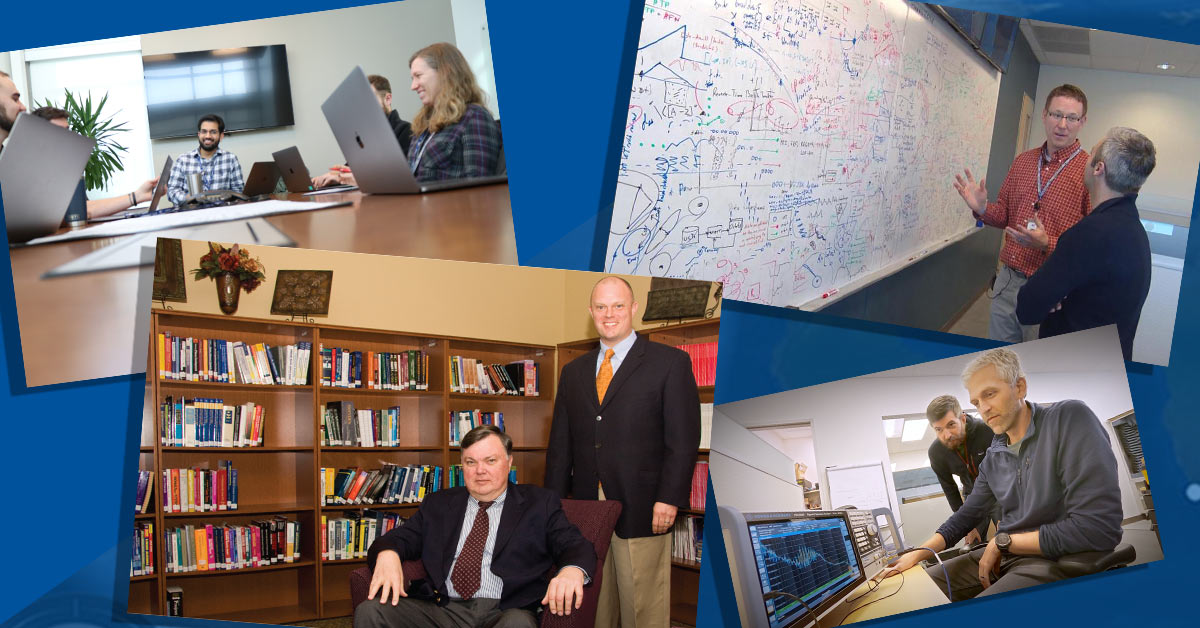 From chalkboards to changing the world: How Numerica grew from humble beginnings to solving the nation’s greatest defense challenges

At Numerica, tackling complicated problems in the fields of air defense, missile defense and space domain awareness is just another day on the job. Their employees, or ‘Numericans’ as they’ve devotedly coined themselves, thrive on a challenge and push forward the academic curiosity that was instilled in the company’s foundation. A foundation that was built and fostered by founder and board member, Aubrey Poore.

It was the early 1970s when Aubrey and his family stopped in Fort Collins on their way to New York from California. Georgia natives, they instantly fell in love with the city and knew they could see themselves living there. Aubrey, who’d received education from both Georgia Tech in Atlanta and Caltech in Pasadena, quickly began his research on Colorado State University and was convinced that the mathematics department offered everything he was seeking. His experience in academia had instilled a desire to tackle significant technical problems and had taught him to approach engineering and science with a broad point of view. At CSU, Aubrey was given the flexibility to investigate the field of numerical optimization and control, becoming an outlet for his interests and furthering his learnings. It was there in the E-wing of CSU’s engineering building, amongst chalkboards and textbooks, that Numerica Corporation was born.

In 1988, an opportunity presented itself that would ultimately pave the way for Aubrey’s future success. IBM gave a presentation on three research problems to the engineering and computer science departments at CSU and asked for proposals. “Although I did not actually attend the meeting,” Aubrey said, “I did write a proposal on one of the topics and IBM chose to fund my proposal!”

It took two laborious years of research and development before Aubrey and his research partner, Nenad Rijavec, were presented with the findings that would solve the task at hand. Using the fundamentals he’d learned at Caltech, Aubrey formed a uniquely different approach to the problem set forth by IBM, securing them the proposal win and recognition amongst his peers.

The proposal win fueled the momentum, leading to a working relationship between Aubrey and the Federal Systems Division at IBM and in 1990, IBM Owego reached out to inquire if he could prepare a tracking approach for them. In 1995, Aubrey and the IBM Owego team officially demonstrated their tracking system at the MFA in the Best of Breed Contest at Hanscom AFB.

“We entered late after the other competitors had been competing for over a year. The results were announced in September 1996, and we won 82% of all Monte Carlo tests and hands down on throughput requirements,” describes Aubrey. “Obviously, this was a stunning demonstration of our new tracking approach and seeded the many opportunities that ensued over the next ten years.”

In 1996, fresh off another validating success and with the encouragement of CSU, Aubrey officially founded Numerica. The name was an ode to the lecture halls at CSU. “I taught courses on numerical mathematics at CSU and envisioned that the science and engineering developed at Numerica would be based on robust numerical methods and algorithms. The name ‘Numerica’ is a translation of the work ‘numerical’ into Italian.”

Word of Aubrey’s accomplishments spread quickly across the scientific and academic communities, bringing in an abundance of work. More work than CSU could facilitate, and more than Numerica could handle as a small team of scientists. As they had always done, CSU advocated for the growth of Aubrey’s company and in 1999, CSURF granted an exclusive license to Numerica for the rights to use the innovations developed by Aubrey there.

With the freedom to grow, Aubrey now only needed support to tackle the company’s business operations. He didn’t have to look far. His son, Jeff Poore, had received a Master of Business Administration from the University of Denver and wanting his father’s business to prosper, agreed to oversee the company’s contracts.

Jeff had strong business acumen and with his guidance, Numerica was able to productize its offerings expanding the business into its current model. “Productization has been a strategic shift for the organization. We wanted to leverage our amazing library of capable technology and bring that in different forms to the larger market without being just in the service industry. To do this, we had to grow our footprint and introduce products to the marketplace,” Jeff said.

Today, Numerica has become a thought leader in vital areas of air defense, missile defense and space domain awareness. Their most recent achievement is marked by the release of their Spyglass™ short-range surveillance radar in 2021. Designed to fill the need for exceptional counter unmanned aircraft systems (C-UAS) detection and tracking performance, the 4D Spyglass radar supports a broad set of applications including facility security, border surveillance, convoy and vehicle protection, air space monitoring and more.

Aubrey Poore currently serves on Numerica’s board of directors, having relinquished the title of ‘President’ to Jeff in 2015. They’ve expanded across three Colorado locations and have 78 employees, or Numericans, that execute on Aubrey and Jeff’s vision daily. They maintain that academia was a guiding light and major contributor to their success, and vow to continue the problem-solving mindset that led them to this point. Both Aubrey and Jeff agree, though, that the secret to success includes:

Numerica has chosen to stay close to its roots, stationing its headquarters in Fort Collins with plans to open its largest location there this summer. Grounded in its strengths and values, the organization has positioned itself for continual success. There is optimism about the future and technology that is to come, although Aubrey’s hope is ultimately to leave a humble legacy of “good science.”